Welcome to the Our Enrichment Time page.

Check back here for when these days are happening, any key information about groups and pictures of these events.

What is the purpose of Our ‘Enrichment’ Time?

Our ‘Enrichment’ Time is an opportunity for everyone to be involved, broadening their own learning.

The chance for children to see our school as a community working together to enrich their learning.

Something they are ALL a part of.

They have the chance to promote their own learning changing things in our school and making a difference to themselves and others.

In the last week of November, as a school, we took part in our first enrichment times for KS1 and KS2. It was a brilliant day had by all.

Please scroll down for updates and images of what each group got up to.

The children got the opportunity to explore and enjoy the world renowned Orchid Project at Writhlington school. The children had am amazing time and learnt so many interesting facts. To start with, we conducted an orchid hunt to uncover a hidden message. We then proceeded to learn more about the plants and even learn some of their Latin names!

We potted our own orchids, produced diagrams and even did some blind drawing.

The children were a credit to the school and I hope they feel that they were enriched, taking away some memories that will stay with them for life.

Key Stages 1 and 2 both spent the day making a variety of Christmas decorations and cards. We used our creative skills to produce some amazing festive masterpieces and practised our fine motor skills with lots of careful cutting and painting.

Everyone loved the chance to work with friends in different classes and to spend the whole day using artistic skills. We even had music and singing (from Mrs Cainey!) to get us in the Christmas spirit and some festive treats to finish off the day!

It was a wonderful day that was enjoyed by all - even the adults!

All the children who took part in this had a great day!

For DANCE enrichment we focused on one particular style of dance which was 'hip-hop'.

We started with a few warm ups to get our bodies ready to move! We then sat (circle time) and discussed the different styles of dance that we have experienced.

After that, we spoke about some of the typical dance moves that hip-hop dance is famous for!

We also practised some of these during 'circle time'.

Finally, we worked as collaborators to put together a hip-hop dance routine to perform to the whole of the school!

We've Got It Covered - The Big Book Project

We had a fantastic day recreating some of our favourite book covers. We used 4 different styles of artwork.

The Tiger Who Came to Tea - we used fabric collage to make this book cover. The children had to cut out the correct sizes and shapes and we matched the fabric colours to the front cover.

The Gruffalo - we used natural collage materials. We went out to the conservation area to find leaves, grass, twigs and soil to add to our picture. We liked this final piece the most!

The Twits - the children used watercolour to make this front cover. We used less water where we wanted darker colours and mixed red, orange and cream together to make the colour for Mrs Twit's skin.

The Very Hungry Caterpillar - we used printing techniques. We mixed light and darker colours and printed them on to paper using sponges.

Build a volcano and learn how they're formed (KS2)

On Thursday, a group of children explored Earth's inferno. We had a great time collaborating together to create our very own volcanoes. We looked at structure and how volcanoes can be both fascinating but incredibly dangerous.

Following this, we discovered how volcanoes are formed. We also found out the origin of the word and where the majority of the Earth's volcanoes are found. We then went on to create our own fact files finding out interesting facts and statistics about them.

In the afternoon, we then learnt about what ingredients we need to make our very own volcanic eruptions. Once we had found out how to do this, we then went outside and used the volcanoes we had made in the morning to create our eruptions.

Overall, we had a fantastic day and enjoyed every minute of it.

The 'recruits' arrived at Pacific Class to find it had been transformed into the PSJ Crime Scene Investigation Academy. They also saw a giant diamond on display, on loan from a local museum. They made identification badges and were then introduced to Forensic Science and how it can help solve crime. We looked at photography, footwear evidence, DNA and fingerprints as sources of evidence. Children took photographs to build a story, took casts of their footwear marks in sand, took their own fingerprints and identified the patterns and what makes them unique and saw lots of forensic science in action. This was helpful as after break the academy became a crime scene, when recruits found the diamond had been stolen. The suspect was tracked down by using the investigative techniques they had learned that day and the diamond was recovered. (Apparently Mr. Lyle thought it was a fake and borrowed it!).

Overall, it was a very enjoyable day and the children were absolutely fantastic recruits who all passed their training and received a certificate.

In our group we had a fantastic day progressing through a range of throwing and catching skills, playing some really fun games and then even creating our own game of 'Diagonal Ball' which we have patented for the next Olympics.

It was lovely to see all the children of all ages interacting with and supporting each other. It was a great day of skills, teamwork, exercise and lots of fun.

In KS2, we journeyed into Outer space for our Enrichment day, exploring the planets and our solar system, using this knowledge to create a fantastic solar system model. Using different materials, we learnt about the different planets and the differences between them and then used this to create some small scale versions of them. Demonstrating some fantastic Collaborator skills, every one successfully create their models. Well done Space Adventurers.

The Year 5 shared area was an oasis of calm and concentration as children learnt about different stitches, then had a little practice before creating some beautiful bookmarks using words and images. Mrs Gulliford, Mrs Swift and Mrs Rich were so impressed by their perseverance and resilience as it was not easy, but everyone created something to be proud of by the end. Well done!

We had a fantastic day learning British Sign Language. We started the day by learning about why we use sign language and why it is so important, not only for those who have hearing difficulties.

We learnt signs for emotions, animals, days of the week, the alphabet, and basic greetings. I was so impressed with how quickly they learnt the signs!

We then spent the afternoon learning the signs to the song 'Sing' by Gary Barlow. They learnt this so quickly we were able to perform it in assembly in front of the rest of the school.

I hope they enjoyed the day as much as Mrs Auton and I enjoyed teaching them!

On Thursday, our collection of scientists had great delight in burning (accidentally), blowing up and smashing their way through their Our Enrichment Time.

I think it’s safe to say that we all had a smashing time! 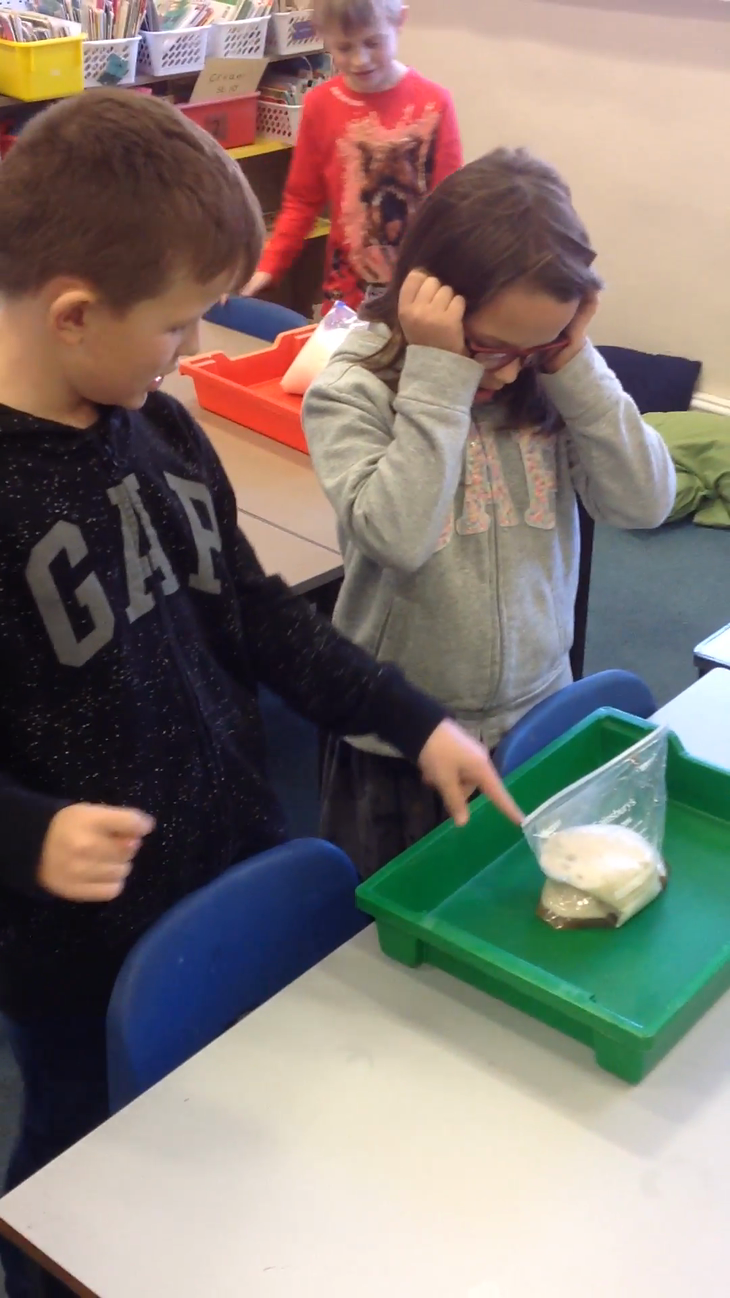 On this day let our imagination go wild! We designed our own wacky creatures, created them in 3D using craft materials and then wrote some "What If?" poems about our creatures!  Mrs Trueman

"I really loved making the sea creatures and the Poems" Ned

"I enjoyed decorating my Uni-fish picture - it was amazing" Amelia

"I thought that I wasn't so confident while I was doing it, but I came out with a good design!" Erin

"It was amazing, especially when we got to put things on our designs!" Charlie

"I loved making the sea creatures!" Grace and Amera

"I thought it was the best day ever! I enjoyed making my Termaid." Daisy

Here is the result of our hardwork!

We joined Katie Morag on her Lovely Scottish Island of Struay. We listened to some stories read by Mrs Clarkson. Then, we looked at a map of Katie's island and worked out which landmarks were created naturally or were man-made. After that, we created  our own Scottish Island, on paper and using Lego. In the afternoon, Mrs Clarkson read the story of Katie's Grandmas and then we created pictures of our own Grandmas/Nannys/Grannys! Finally, we watched a CBBeebies Katie Morag programme, while eating "porridges" (flapjacks) and Scottish shortbread!

"It was the best day ever!" Zara

The mobile makers spent the day designing and making our very own mobiles around any theme that we wished. We had children create space, underwater and jungle themed mobiles. Our creations were beautiful.

In KS2, we set up a pop-up cafe and sold homemade pizzas after school. We used our fantastic collaboration skills to work as a team to create our cafe. We developed our kneading and cutting skills in order to make 10 delicious pizzas. In the afternoon, we used our math skills to discuss how we could make a profit. We also spent time handling money, role playing giving change to customers. We set up our cafe in the hall and sold all 80 slices of pizza, making a profit of £46.20. Well done Pop-up cafe team!

Unfortunately not the ones with chocolate chips.

Some cookies are necessary in order to make this website function correctly. These are set by default and whilst you can block or delete them by changing your browser settings, some functionality such as being able to log in to the website will not work if you do this. The necessary cookies set on this website are as follows:

Cookies that are not necessary to make the website work, but which enable additional functionality, can also be set. By default these cookies are disabled, but you can choose to enable them below: